Visayas State University is the premier state university in the Visayas. Along with being a leading science and technology university in the Philippines comes the need for the university to be globally comparative in terms of how it connects to its units within and to the world.

November 8 2013, super typhon Haiyan or Yolanda damaged VSU’s network systems. Our leased line provided by Bayan Communications Inc. that connects VSU to World Wide Web was shattered can no longer be restored. VSU also suffered a Fiber Optics cut. Our Local Area network backbone was heavily affected by the typhoon. 90% of VSU fiber optics backbone can no longer be restored.

This proposed renovation of VSU’s network aims to address the various problems related to VSU’s connectivity, including slow data transfer, no reliable infrastructure, no fault tolerant, no good communication systems between offices or departments, slow Internet connection and manageability of the network, obsolete bandwidth and active devices.

No Reliable and Good Network Infrastructure

After Typhon Haiyan Wireless Fidelity or WiFi was VSU’s “Network Backbone” to connect its offices and buildings. This type of medium can be easily congested and performs very poorly compared to copper or fiber optics. This can also be easily disrupted due to tall canopies and bad weather. Data transmitted via wireless from one point to another tend to stop or halt due to congested network and this makes the network hard to transmit large files.

The network is also prone to fault and is hard to manage since the active devices are already obsolete and need to be replaced.

The servers used for the network are also obsolete (15 years old). Servers running on Pentium 3, 256MB of RAM and 40GB of Hard Disk Drive make it difficult for programs and apps to run properly. Server specs can also affect the speed, security, and reliability of the network.

As technology evolves every day, the demand for broad and high bandwidth also comes in parallel. In 2003, the average webpage size was 100-300 Kilobytes (KB). Today, webpages average about 1 to 3 mb which is an increase by a factor of 10.

Now, there are approximately 450 users (excluding the students) that are connected to VSU’s network.  When these number of users access a website concurrently with 3MB of size, that’s 1.05GB of network traffic passing to 100 Mbps of virtual wireless backbone. VSU’s virtual wireless backbone cannot handle this kind of network traffic due to the limitations of wireless technology.

Nowadays, Cloud Computing has laid the ground for a new generation of educational systems, by providing scalable anytime/anywhere services simply accessed through the Web from multiple devices without worrying how/where those services are installed, maintained or located.

VSU uses Google Apps for Education suite. These are free apps by Google where VSU can avail of unlimited Google Drive cloud storage for each user, unlimited email accounts, unlimited email storage, and Google docs where users can collaborate in real time. These free apps are accessible via Internet. Also, our University Library has acquired free subscriptions to some eBooks and journals publishers like Springer, Cengage learning etc. With slow Internet connectivity, users will have a hard time accessing these services.

Also, Internet is the new medium of communication in the form of Emails, Voice Mail, IP/PBX, chat and many others.

From 2000 to 2013, VSU was serviced with ‘2Mbps’ leased line. Nowadays, 2Mbps can only service 2-5 Users or equivalent to one household only. It is reasonable that such a connection can no longer service 450+ since the data transmitted via Internet has increased exponentially. 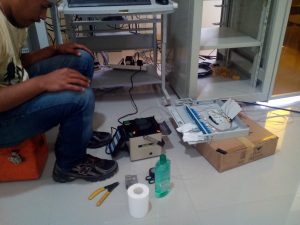